So my door bell ran out of battery, and I started wondering if I could use my security camera instead. In retrospect I could have gotten some batteries from the battery drawer, but where is the fun in that!?

So a while back I bought a bunch of Hikvision and Reolink Power over Ethernet (PoE) 4K security cameras. I like them because they only need one wire and have great quality builds for the price. I don’t trust them at all though, so they are almost completely sealed of from both my network and the internet using a VLAN. Only my kubernetes cluster can reach them, and nobody else.

When I initially set these cameras up I looked for a tool to capture and save video. There were a huge number of options, many free, some with usage restrictions and even more paid solutions. But what I did notice was that they were all pretty much doing the same thing. Transcoding using GPU, some type of motion dectection, and many of them where now starting to do object detection using the Google Coral TPU. And a lot of them were really old. So I started searching Github (sorry Gitlab) for mentions of “Coral” and “Onvif” a standard many security cameras rely on which makes using them with different tooling much easier. That’s when I found Frigate.

At the time the project was fairly new, but it had everything I wanted. It could do GPU offloading for transcoding of video, so less CPU usage. There was super fast object detection using the Coral, again much less CPU usage. And finally it had a good Home Assistant integration via MQTT so I could easily set it up in my existing system and I could use the Home Assistant app to view my cameras. So both mobile and web access; Score!

Since I had already setup 4 google corals in my kubernetes cluster, I was ready to start playing with Frigate right away. (You might have forgotten, but my mission here was to replace my door bell)

The author of Frigate has a helm chart which I use to deploy and the documentation is actually really good, so that should cover all your needs. But in summary, you need to define your cameras and tell Frigate if it should record everything, or just certain objects. You can also specify a low quality stream for the object detection, and a full quality stream for the recording.

For my doorbell replacement though, I had to define some zones within the camera, so that I could be notified if someone is coming to my house. So let’s first look at my Driveway camera: 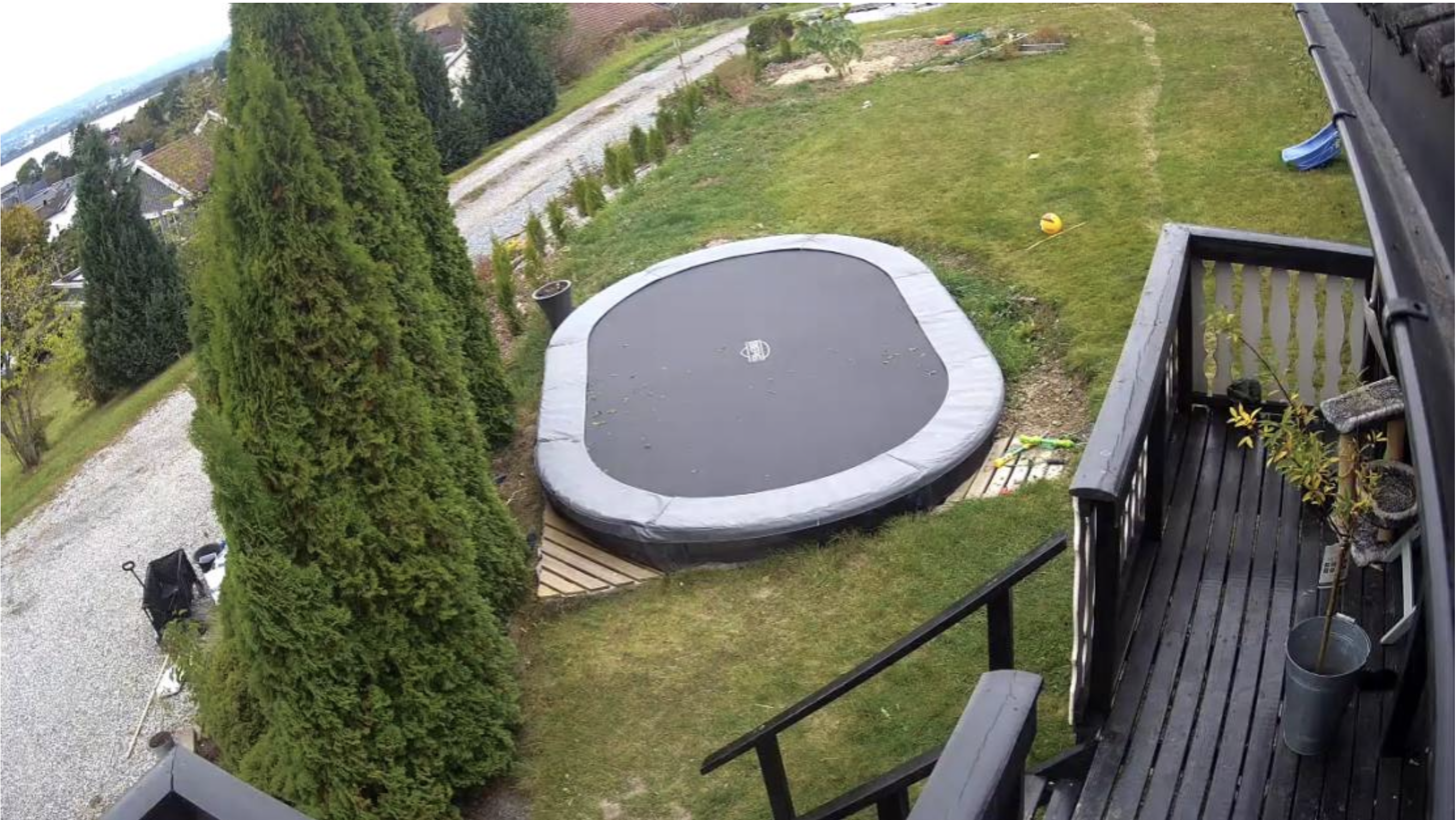 You might think that it’s a bit weirdly angled, but that’s intentional. I want to get both the parking area in front of the house, the beginning of the drive way, and the entrance to the veranda. You might also notice that there is a huge problem here with motion detection, the trampoline. So to stop the kids and the trees from triggering the motion detection I’ve added a some masks: 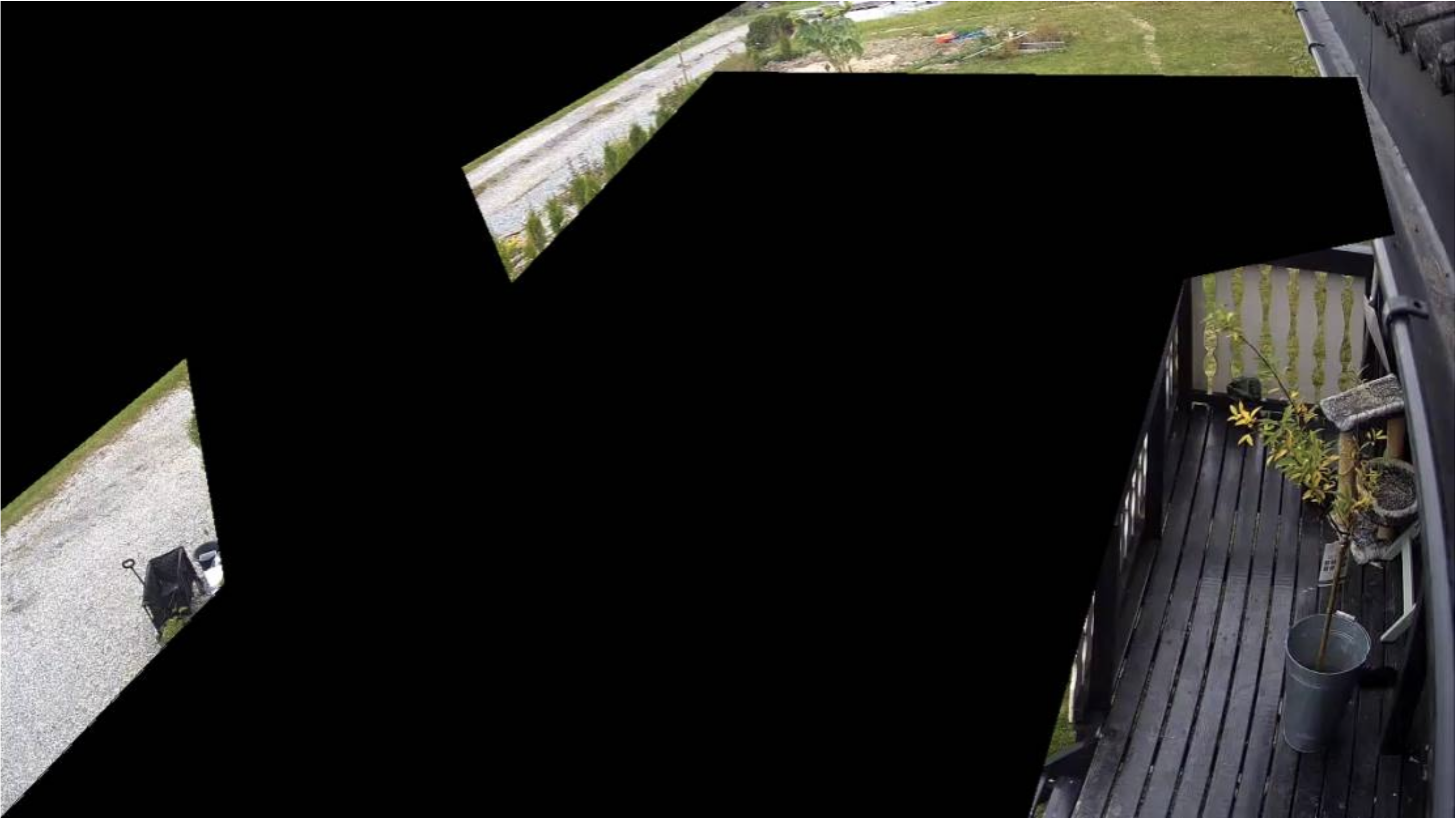 Now only things that are visible here can trigger the motion detection. I did not anticipate that my wife would plant more trees along the road, so I might have to deal with that soon.

The final step is to add zones, so Frigate can tell me in what area an object has been detected. 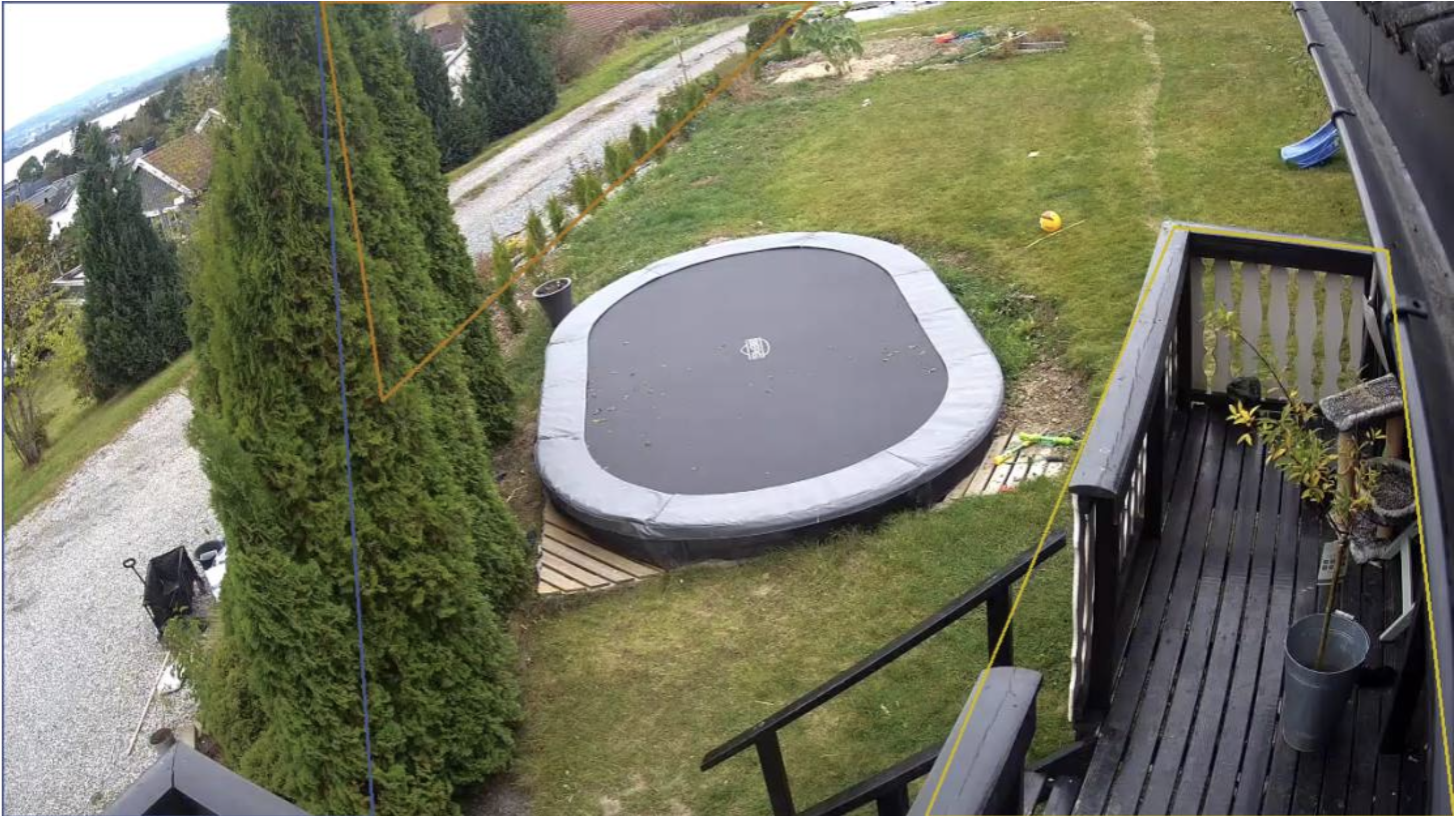 So the bluish zone to the left is “parking”, the orange zone on the top is “road” and finally at the yellow zone at the bottom is “veranda”. Now frigate will send MQTT messages every time it detects movement. It could be only movement and no objects, or multiple objects all at once. The JSON payload in the MQTT message will have two objects which are Before and After. So if a person walks into the “road” zone, I’ll get an MQTT message with an event saying that ‘Before’ there was nothing anywhere, but ‘After’ there was a ‘Person’ in the zone ‘Road’. This makes it very easy to write simple automations in Home Assistant like so:

So this automation is triggered by an MQTT message on the ‘frigate/events’ topic, and checks if a person or a car is detected in the ‘After’ object. We also check if the object was first in the ‘Road’ zone and later in the ‘Parking’ zone. Meaning this object is actually coming towards the house. And finally, we send a notification to my phone, with a thumbnail of the object. I also have a speaker in the living room announcing these events, because I like robot voices :D

There’s also a reverse automation to alert me when something is leaving, but that one doesn’t really help me with the ‘doorbell ran out of battery’ situation.

Frigate uses a pre-trained model for the object detection which works really well for most things I’ve tried. It also has a lot of objects I haven’t bothered testing, but I’m still waiting for it to detect motion from a toaster though. It’s probably an ominous sign.

Let’s instead finish off by watching an event unfold:

As I’m walking in the ‘Road’ zone Frigate quickly identifies me as a person with 77% accuracy. This event alone does nothing for my automation, but as I pop out behind those trees I’m again identified now with 84% accuracy as I enter the ‘Parking’ zone. This triggers my Home Assistant automation and a notification is sent to my phone: 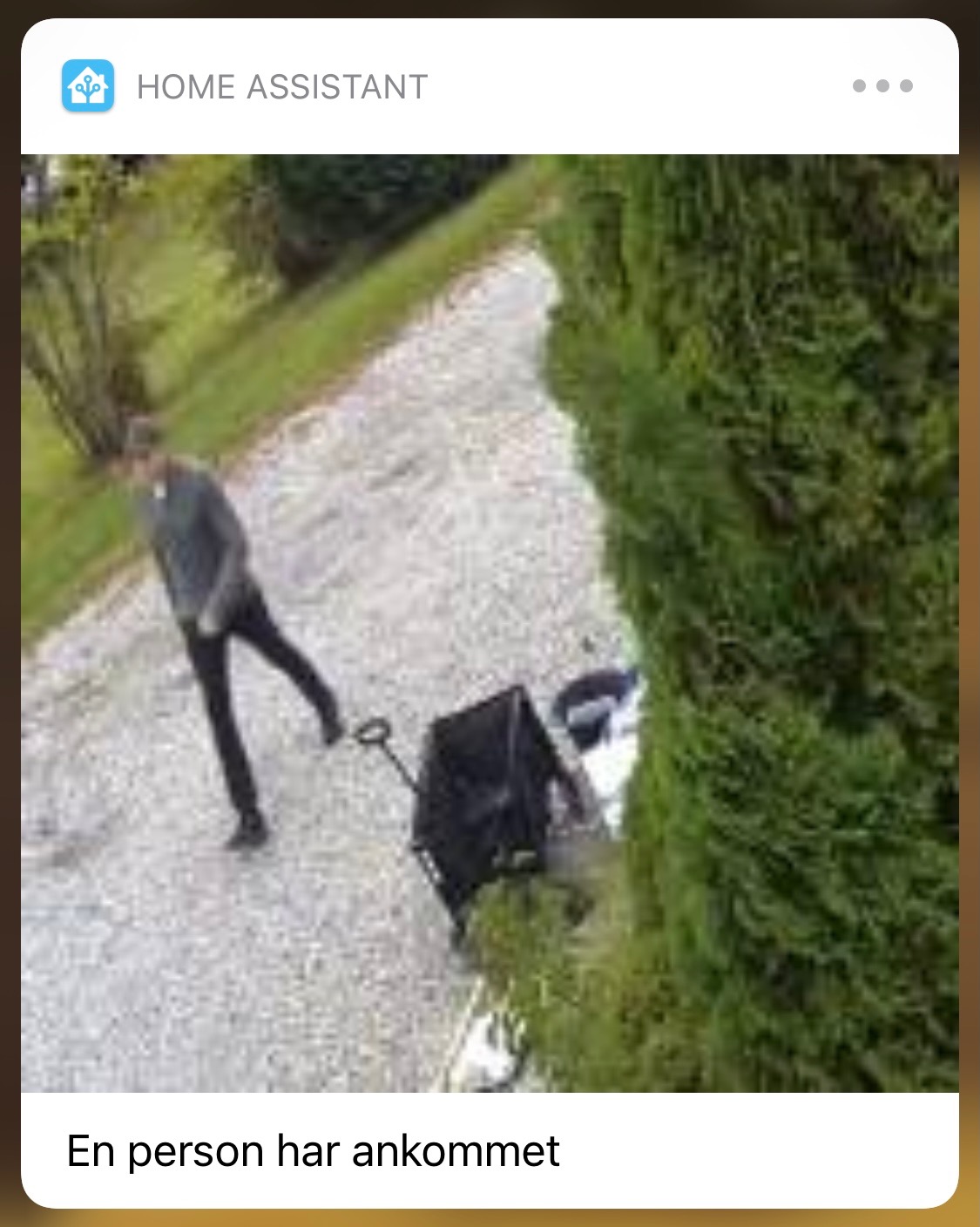 The notification is in Norwegian on the screenshot from my phone, but it says “A person has arrived”.

Frigate has been rock solid for me for almost a year now, and there are lot’s of cool features in the pipeline and on the drawing board. One thing I’m particularly interested in is license plate detection on cars, so I can know if it’s my wife that have just arrived or if it’s the pizza delivery guy. Both are great, but one has pizza!

Unfortunately that is a risky landscape with regards to privacy so it might be hard to get right.

If you have a camera lying around I really recommend you give Frigate a try, as you can even get the object detection without the Coral, at the cost of higher CPU usage.