I don’t like having to relying on other people’s computers, aka the cloud, so when I can I selfhost the tools and services I need. But sometimes there isn’t a service to selfhost. This was the case with my mysterious smart water meter which is now enforced by my municipality. After some research I found out that I might be able to get to my precious water data by using a radio dongle. Luckily I already had one in my gadget drawer. A RTL2838 usb dongle to be precise: 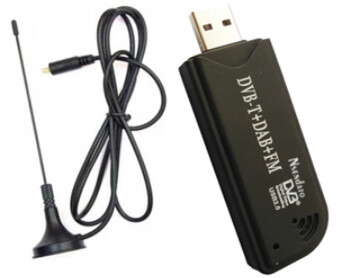 The whole ecosystem for these devices is huge, and there are so many cool projects to explore. I got stuck playing with a few projects unrelated to my water meter for a while, and I especially liked rtl_433. It uses the radio dongle to listen on 433.92 MHz (and a few other frequencies) looking for known weather stations. I actually discovered 3 high end stations around my neighborhood which gave me real time wind, temperature and humidity. I’ve already ordered an extra dongle for this use case since there is already an integration with Home-Assistant in place.

But finally I remembered what I was doing and found the wmbusmeters project, which does exactly what I want. Decode and analyze the signals from smart water meters, and actually any device using the WMBUS standard.

I had to compile it for my raspberry pi, but that was a fairly straight forward process. After a few minutes I was up and running and receiving data from my, and a few other, water meters. But the data was unfortunately (or fortunately?) encrypted. The wmbusmeters project has support for decrypting the data but I would need the decryption key. Since the water meter was installed by the municipality I didn’t have much hope of getting any further.

I shipped an email to the guy in charge of the water infrastructure, and to my joy, he was really interested in my little project. Turns out they will have to learn how to do this exact same task to read off the water usage for houses around the municipality (that word is starting to annoy me). So I got my key and boom! Water data! :D

I was pretty stoked about how simple this was, and immediately set out to deploy this to my Kubernetes cluster, hoping I could push the data to Home-Assistant. The project has good docker support, but unfortunately no Helm chart, so I added one to k8s-at-home, which is where I get most of my helm charts.

The setup was fairly straight forward and with one extra configuration option I got all that sweet water data into home-assistant:

This line is added to Values.config in the helm chart and basically tells wmbusmeters to export the data using mosquitto, which passes it to my vernemq broker. Home assistant is setup to autodiscover sensors over mqtt and boom, I can make a nice little dashboard panel!

This is just showing the current temperature and water usage of the day. You might have noticed from the json above that the usage is reported as total_m3, so every night at 23:59 I reset a simple variable so I know what the usage was before the day started. By subtracting that value from the total_m3 I get today’s usage in cubic meters. Also 1m3 == 1000 Liters.

So that also gives me a nice overview. I need to cleanup those decimals though. 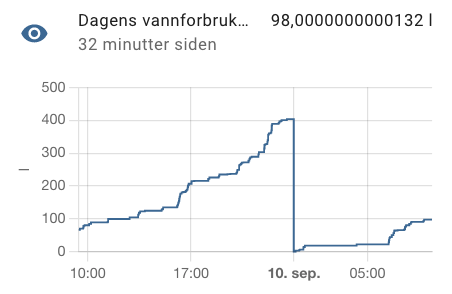 One issue I had with wmbusmeters though was pretty high cpu usage. After some digging through their Github Issues I added another configuration line which let’s me ignore the packet types I’m not interested in and let’s me be a little less precise when decoding packets. That cut the CPU usage in half, which is nice.

I had a lot of fun with this, you should try it too! :D